From the Philadelphia Inquirer 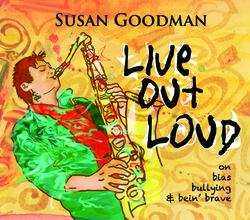 "Many anti-bullying programs emphasize respect for others... but don’t sufficiently educate students about the biases that shape our thoughts, speech and actions. Goodman developed 'Stand Up! Speak Out!' to fill that programming need for schools and community groups."

NORTHFIELD, NJ (August 13, 2012) –   With lyrics like “don’t use my identity like it’s an obscenity”, New Jersey jazz musician Susan Goodman gets the attention of kids K-College through her music. Performing original songs with an urgent beat, her wailing saxophone and frank lyrics, Goodman challenges students to examine the bias behind bullying and bystander behavior through her music-based anti-bullying programs entitled “Stand Up! Speak Out!” Originally inspired by the bullying her two sons experienced in middle school, Goodman applied her multi-faceted musical talents to her 2000 CD release “Stand Up! Speak Out!” She has been in demand ever since, doing music-based assembly programs and community concerts on bias and bullying throughout the tri-state area of New Jersey, New York and Pennsylvania.

Goodman’s newest CD “Live Out Loud,” released in 2012, was fueled by the outrage and sadness she felt about persistent news of teen suicides attributed to bias-based bullying. Just as the suicide of Rutgers freshman Tyler Clementi was the catalyst for New Jersey’s new Anti-Bullying Bill of Rights, Goodman was especially moved by that tragedy because, at the time, her gay son was also a college student.  "It was past time to take on the anti-gay bullying he had endured, and for schools to get serious about bias-awareness," Goodman said.  In her song, "Bein' Brave," she calls on her listeners to “Sound the Alarm, Stop the Harm.”

Goodman, a highly regarded anti-bullying advocate and educator, tailors her programs to engage students K-12 in upbeat, interactive presentations in which she plays saxophones and flute, performs original songs and opens up dialogues about character and courage that will guide them for a lifetime. “Some may defend students’ biased remarks as protected free speech,” said Goodman, “but by law, that right is trumped by the right of every child to safety and civility in school. Young people are so music savvy. I respect that and write songs with the kinds of lyrics and contemporary arrangements that will get their attention.  Music is a great way to reach them and get them to truly hear the hard questions I’m asking them, about how bias affects our behavior.  The lyrics also challenge those who are compassionate to refuse to be silent bystanders.  I ask them to be brave and speak out, to have the courage to be an Ally for anyone victimized by hate speech, cyber-sniping or ridicule.”

“Many anti-bullying programs emphasize respect for others,” continued Goodman, “but don’t sufficiently educate students about the biases that shape our thoughts, speech and actions.”  Goodman developed “Stand Up! Speak Out!” to fill that programming need for schools and community groups.

The compelling lyrics in both “Stand Up! Speak Out!” and “Live Out Loud” reflect Goodman’s commitment to social justice and the right of every child to a good education in a safe space. An award-winning, engaging performer, her music is informed by an educational background which includes a Holocaust-Genocide Education Certificate from Richard Stockton College of New Jersey, State of New Jersey Certificates in Bias-Based Bullying and Bullying Prevention, a Teaching Artist Certificate from the University of the Arts in Philadelphia and a BA in Political Science (African American Studies and Spanish minors) also from Richard Stockton College.

A New Jersey-based professional saxophonist/singer/songwriter and recording artist, Goodman was raised in Bloomfield, Essex County, and performed in Boston and New York until settling near the vital Atlantic City music scene, where she raised her two sons in Northfield.

About “Stand Up! Speak Out!”:  Designed as a menu of music-based assemblies and presentations geared for young people from kindergarten through college, “Stand Up! Speak Out! - Breakin’ Down Bias and Bullying through Music” addresses urgent topics covered by statues on Harassment, Intimidation and Bullying (HIB).  Susan Goodman’s programs incorporate live music, interactivity and discussion to promote respect for all people and identities, regardless of real or perceived differences, including appearance, ability, race, national origin, language, accent, religion, gender or sexual orientation.  Study guides are included for ongoing learning and Goodman offers professional development sessions as well.  Age appropriate themes range from celebrating diversity and using “words, not hands” for little ones, to cyber bullying and respectful dating for older students. The programs help students examine the bias behind bullying and the roles we choose to play: Perpetrator, Collaborator, Silent Bystander or Ally.  “Stand Up! Speak Out!” promotes courage and compassion to be an ally, to speak out for one another and make a difference.